Before I dive into this week's blog, I just wanted to show the determination, teamwork and wrestling capabilities of the children we work with on a daily basis. 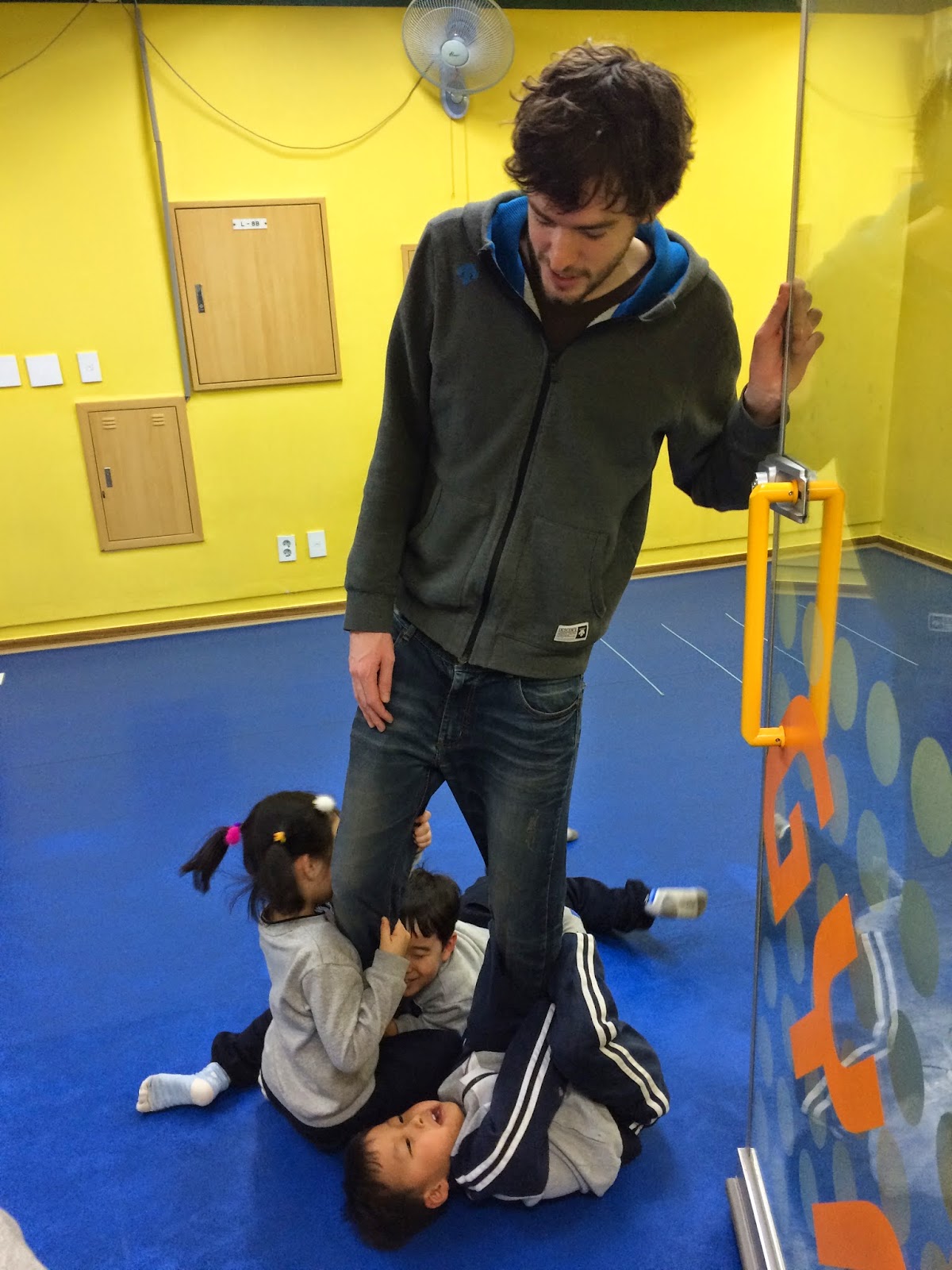 Here is Craig teacher and a few Kindie kids that are quite adamant that he not leave the gym. 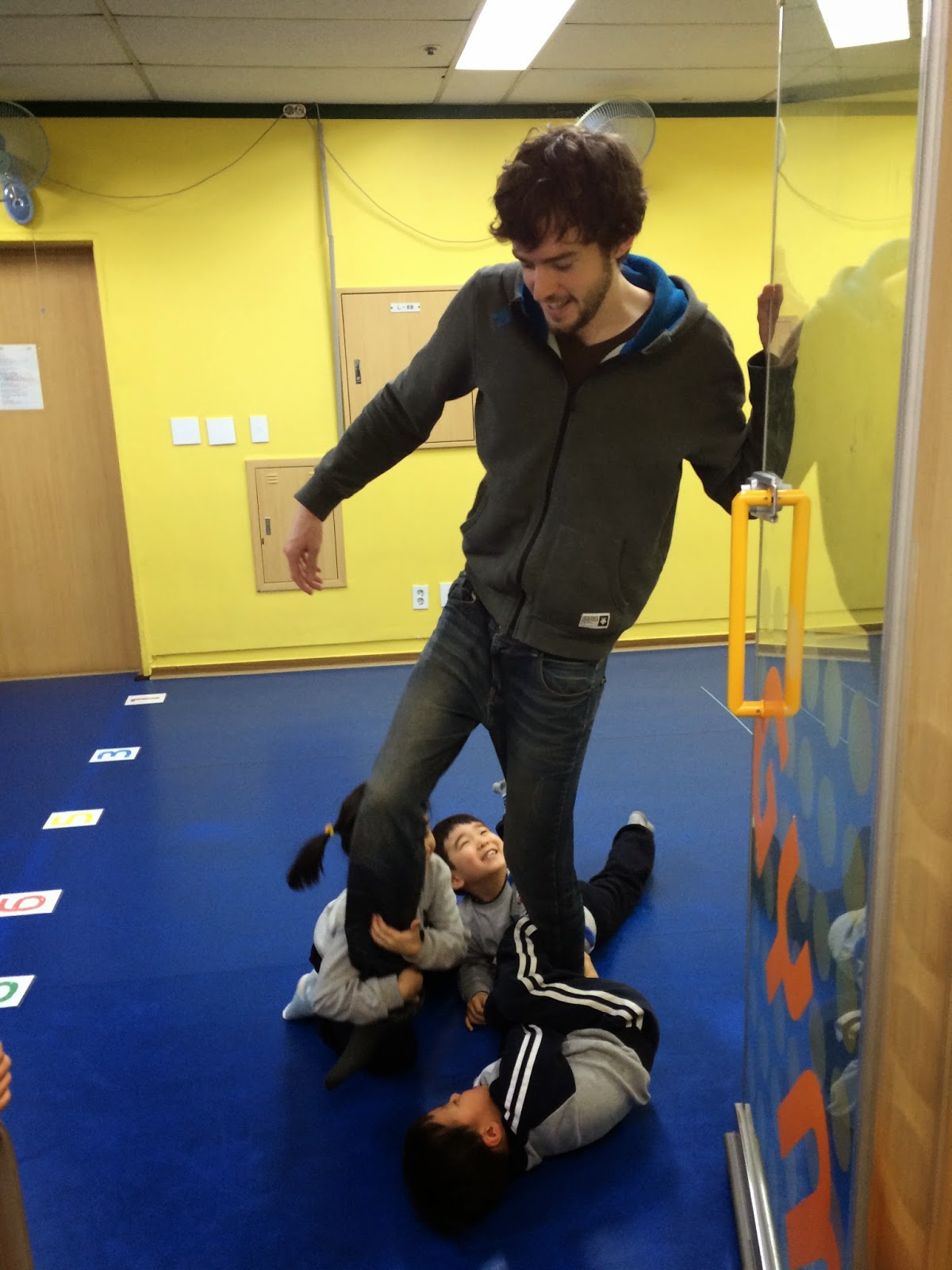 And the struggle continues... 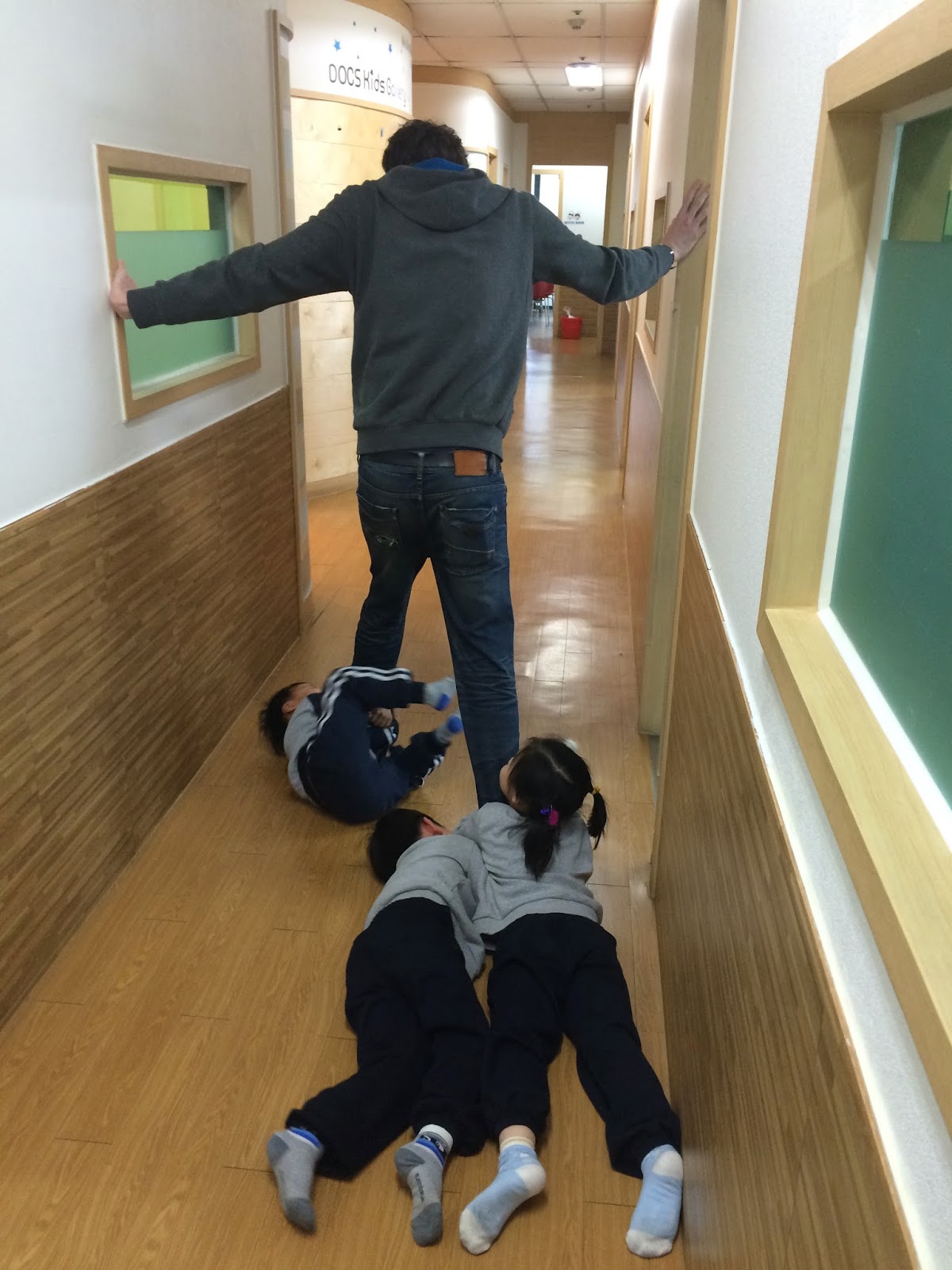 And even in the hallway they will not be swayed!

You may think that this was a special occasion, or I forever have my camera at the ready for such moments, but actually, it is a fairly common occurrence, in fact the last three days consecutively my Kindie class has wrapped themselves around my ankles (and calves, and knees, and thighs, as there are eleven of them) when the bell rings with a chorus of little voices pleading 'No, Tierney Teacher! Don't go! Tierney Teacher, stay!'. Its pretty stinkin' adorable. Also, on the day pictured above, the kids stayed with their resolution so long I actually had time to witness the cuteness ensuing, walk to the teachers room, get my phone, walk back down the hall to the gym (because there is no running in the halls; safety first) and snap the pictures. Again, pretty stinkin' cute. **Pictures with/of my kiddo's are coming up soon, but as they are from this week (May 30th - April 3rd) I can't post them until I catch up this blog, so the anticipation must continue** 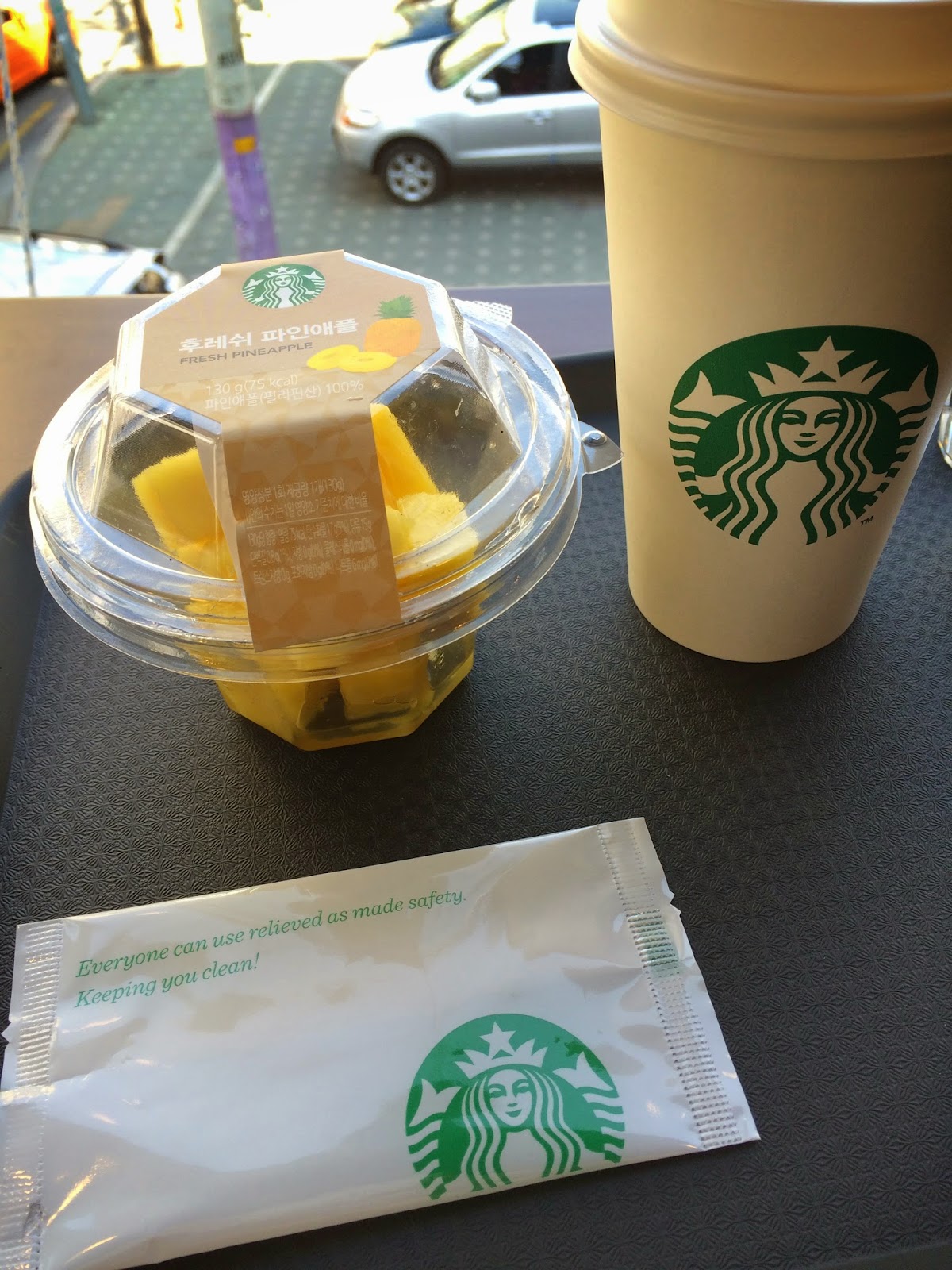 Jumping to a totally new topic, but one that still brings me joy, a Starbucks just opened literally two blocks from our work. Talk about luck! It is as if the coffee gods heard me moaning about how there seems to be a Starbucks everywhere, except between our home and our work, and decided to take pity on me. But at first I didn't know the location was new, in fact I was walking around before class one day and just sort of stumbled upon it. I thought to myself "how have I never noticed this here before?" and concluded that it was because it is across the street from a Baskin Robbin's that has posters of Shinee in its windows, and each time I walked by I must have been so enthralled with the pictures I didn't even glance across the street to see my little slice of home...but then Taylor told me that the Starbucks opened on the 24th (and this picture was taken on the 25th) so I felt much less silly :] In addition, I don't know if it can be read from this photo, but the wet nap I received with my chunked pineapple reads as follows:


Everyone can use relieved as made safety.
Keeping you clean!

The Konglish (Korean's version of English) is frequent and prominent here. And brings me barrels of laughs! I'll post more terrible translations as I find them. I just couldn't believe that Starbucks, a Seattle-based, American company, had such a wild mistake! Ah, the humor still brings a smile to my face even as I write about it a week later!

The next little gem I found in my phone as I reviewed pictures was the following... 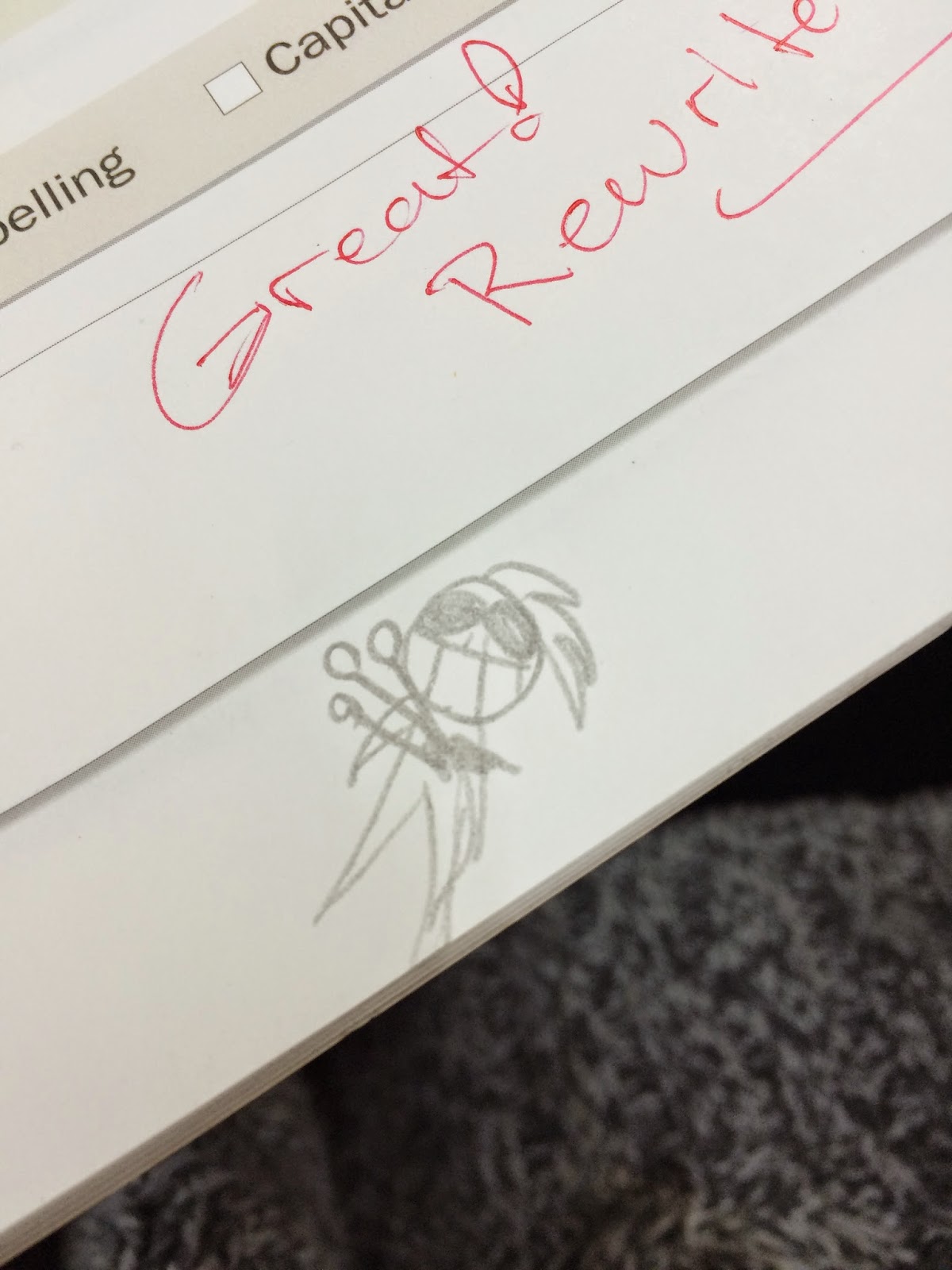 One of my student's artwork on an essay book. She is a very funny student, who often doodles, and is always the first one to offer her unique art skills in class when I can't adequately draw something to describe the definition of a word, so I let her possibly-offensive sketches slide...usually :P

Next up are Thursday's photos (according to my phone's memory) when Taylor and I explored the Hondae area, without seeing any performers or doing any shopping. We stayed more to the main roads, not by the University, and just walked, as it was a warm enough evening. Here's what we found: 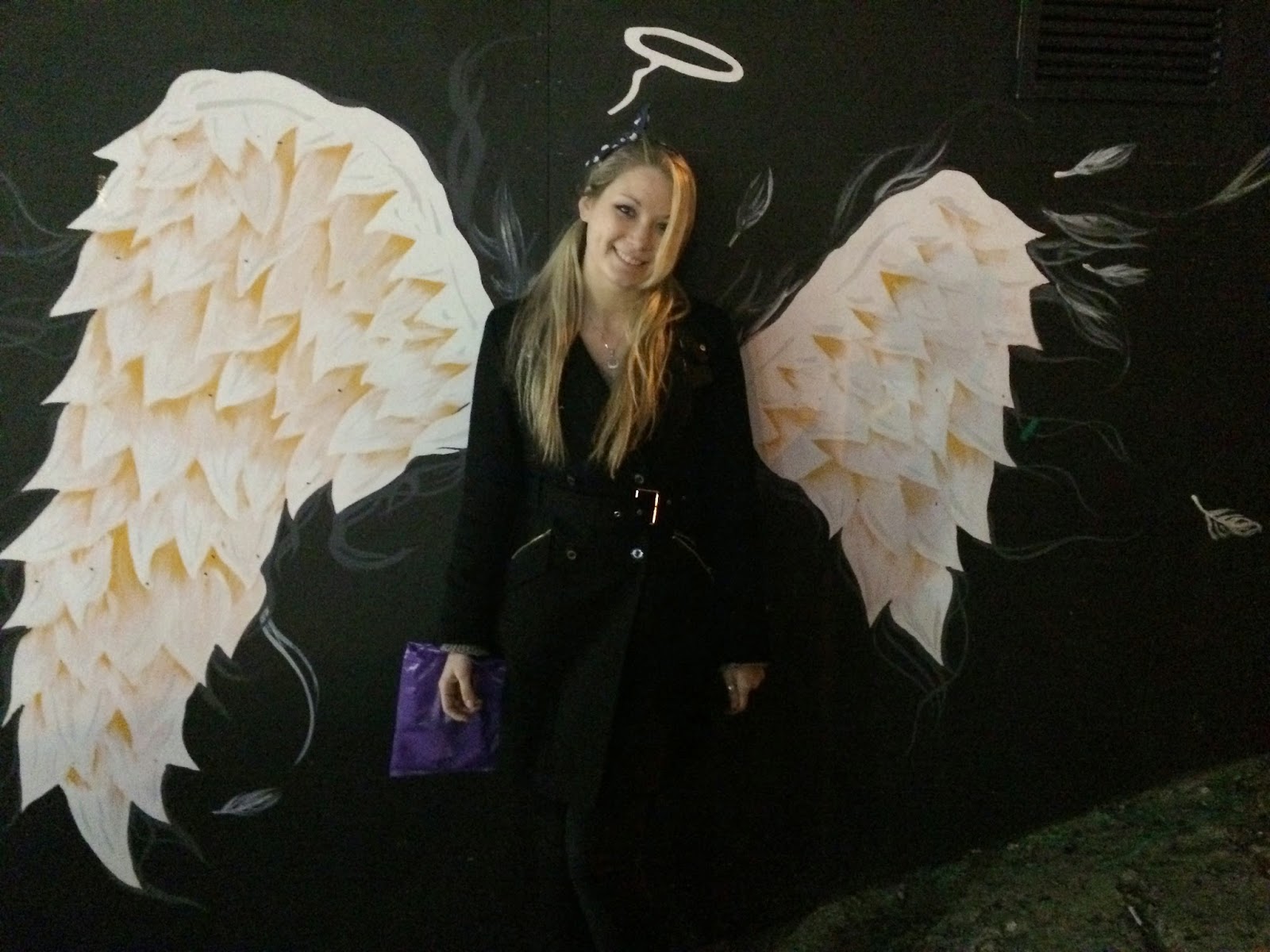 A neat mural that caters to a main obsession of mine, so it seemed too coincidental to NOT take advantage of, and Taylor was happy to oblige. And in the purple bag? Why, more headband bows/hairbows of course, the best Korean fashion indulgence I have yet found. I have a bow in my hair almost every day now, as you may have noticed... 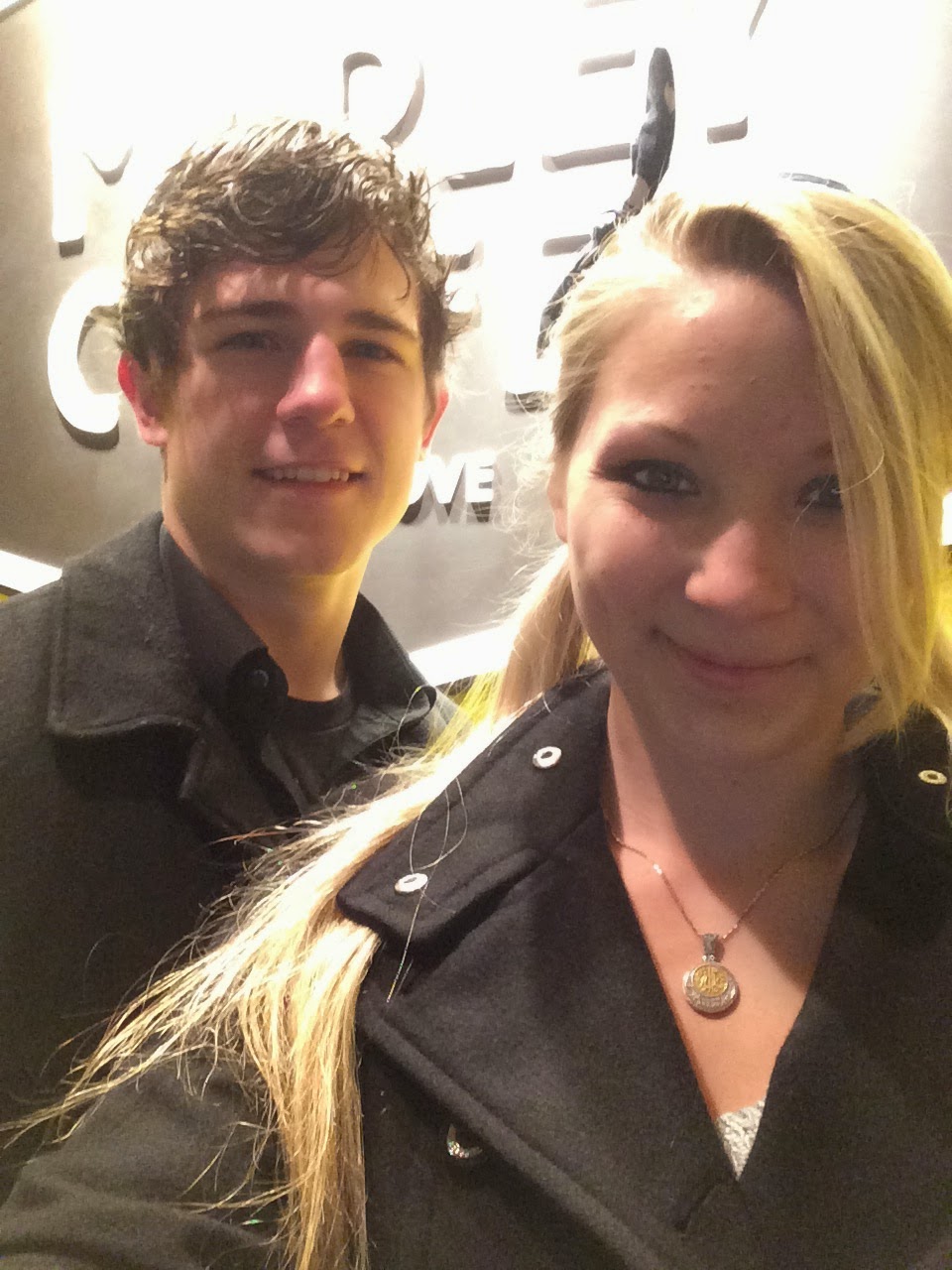 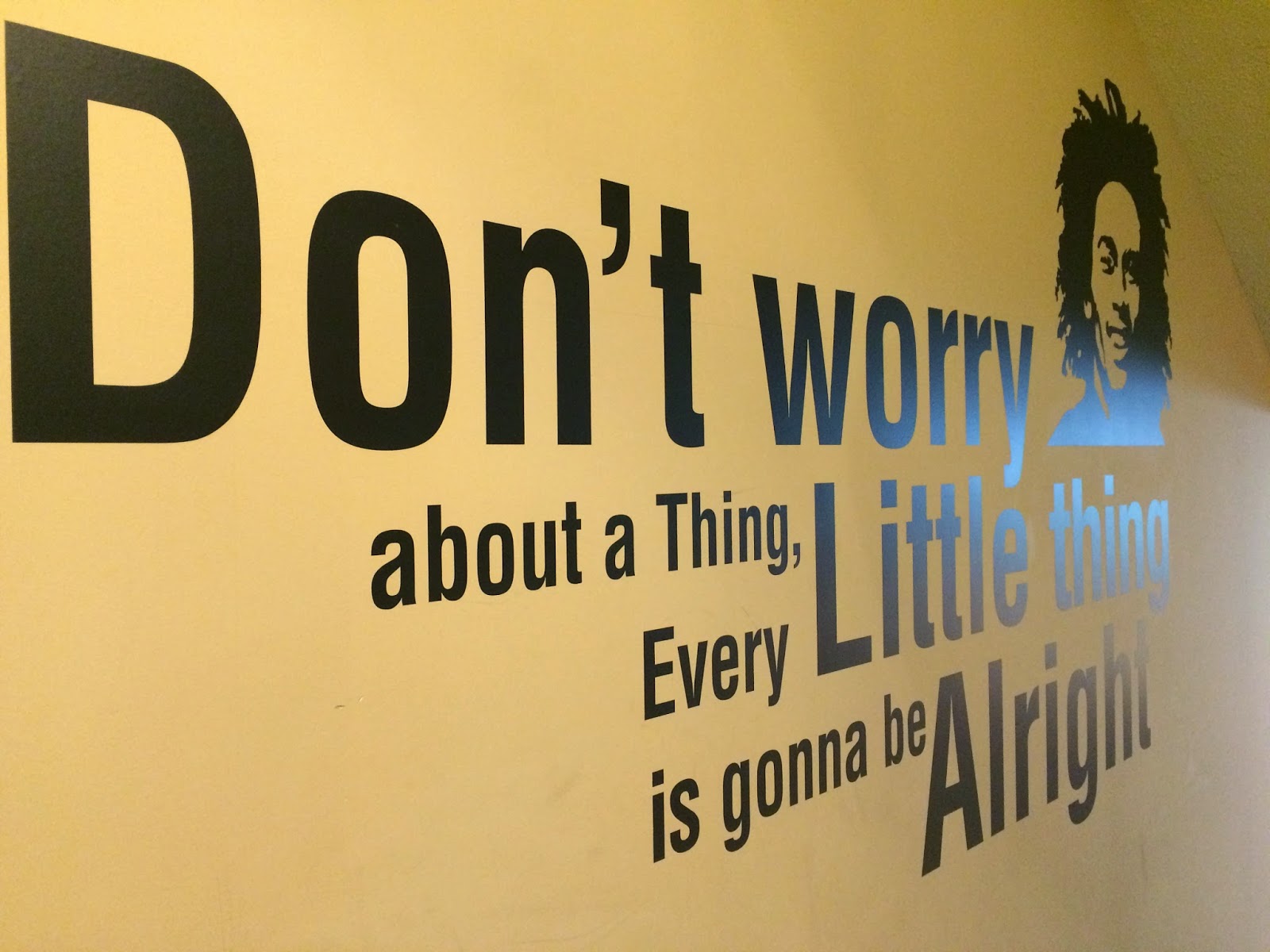 A unique coffee shop which from the outside seemed very Rasta, but inside was actually quite elegant, though Taylor and I weren't feeling very coffee-ish, so we just walked in, had a look about and moved on. 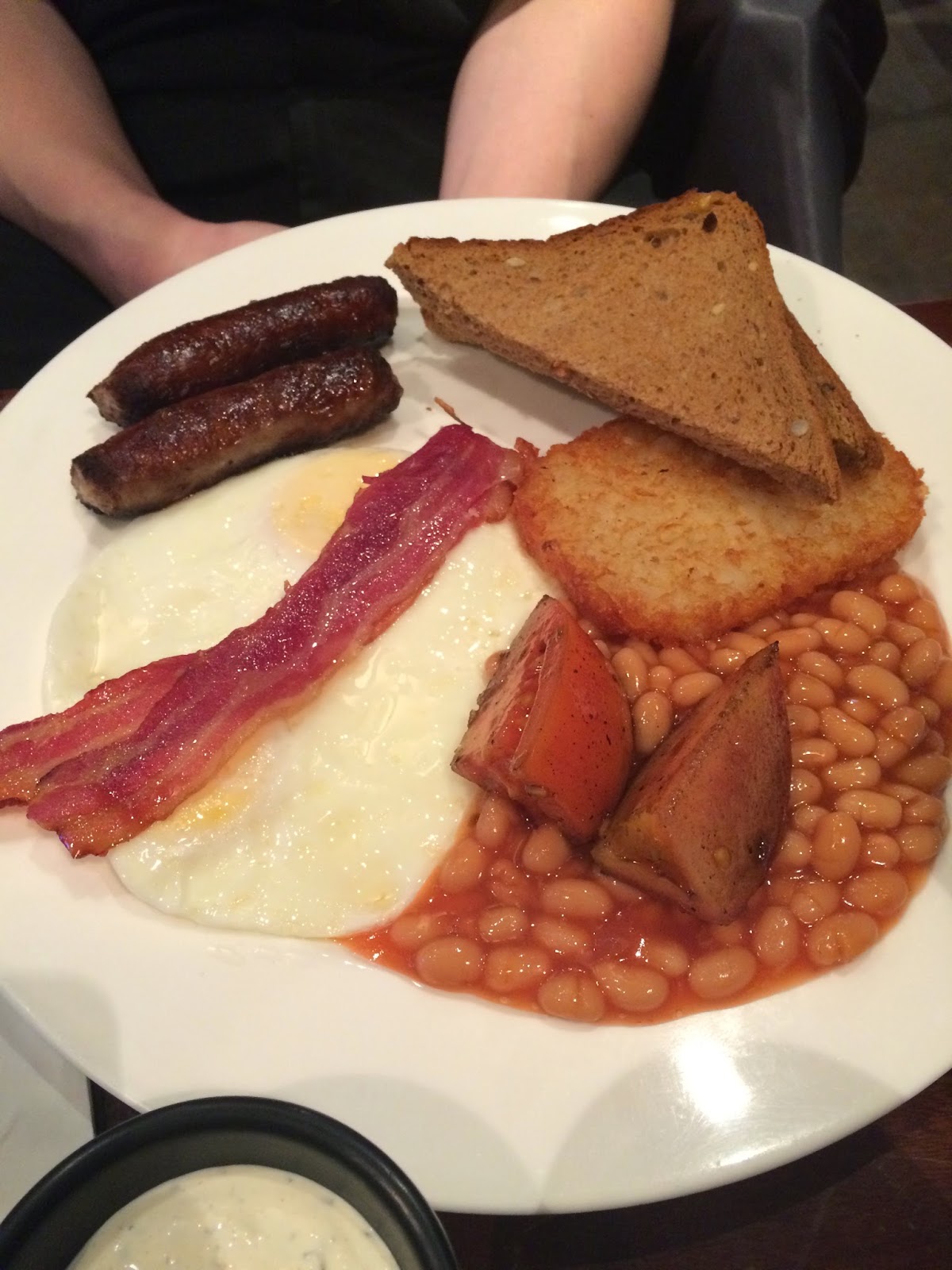 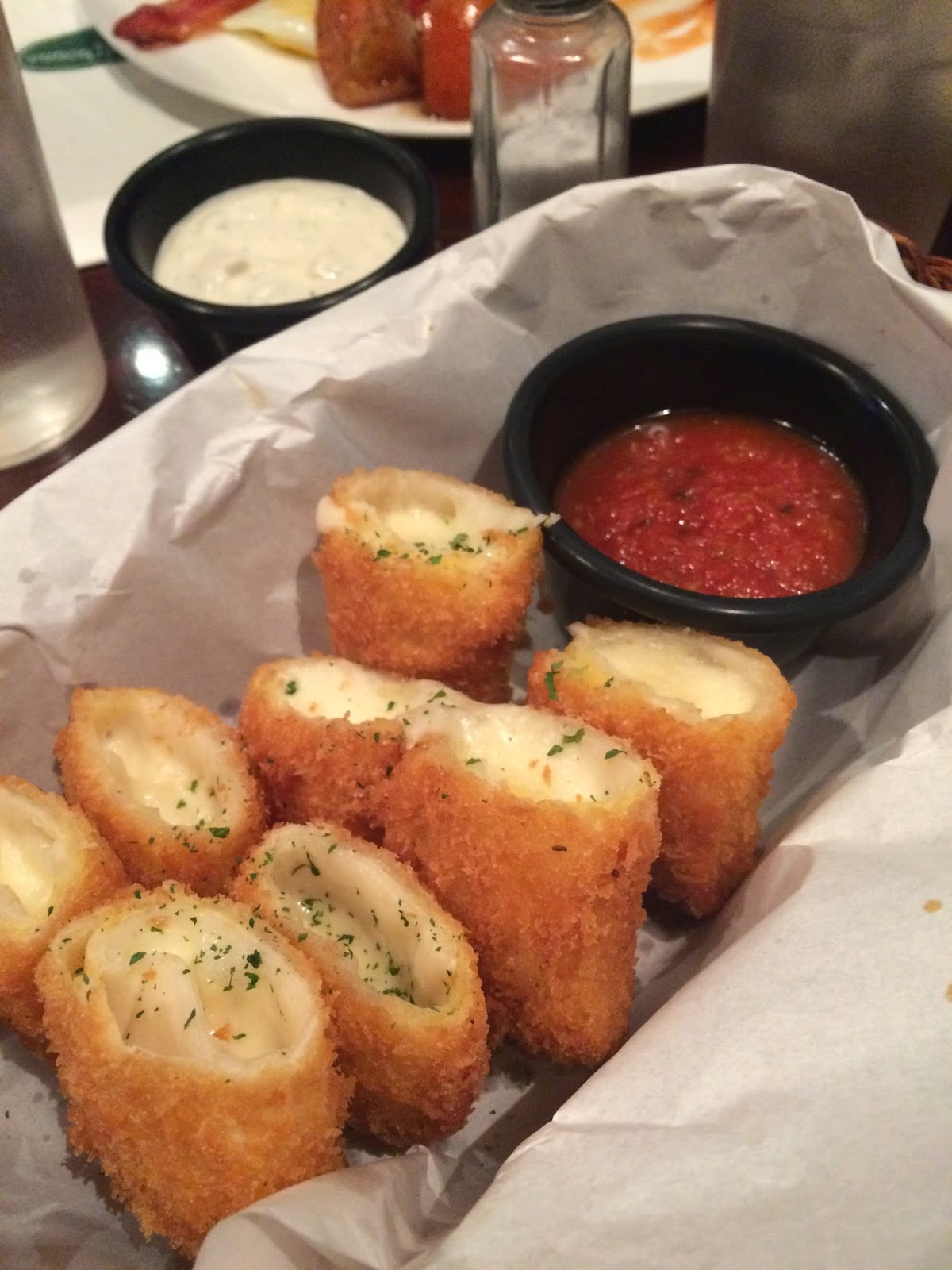 And finally! What is a picture tour without some close-up food shots! Plus Thursday was my night to pic the venue, but I was having a difficult time in Hondae as I'm not yet familiar with the area with Taylor and I were getting hangry (angry due to hunger). About three minutes before we found the little Irish pub pictured above, Taylor said (and I quote) "I wish there was a place I could get breakfast all day"...and then I spotted this eatery and lo and behold, we found breakfasts platters on the menu. I believe the item Taylor ordered was even aptly named the 'all day breakfast' >.< And I got mozzarella sticks, with ranch, because I was in a greasy-cheese-dipped-in-fatty-goodness kinda mood.

Friday truly only brought about one item of note; 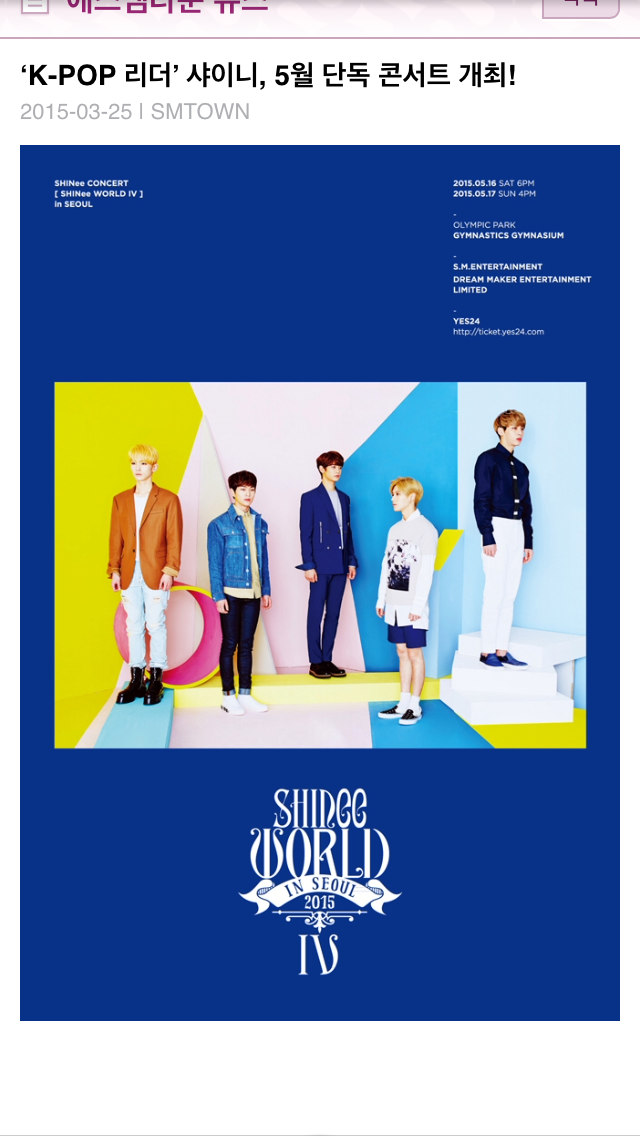 Yes, that's right, Shinee (my favorite Kpop group) have announced a concert for May 16th in Seoul at the Olympic Stadium. EEK! Tickets go on sale Thursday at 8pm...and I shall be waiting by my computer hoping to click fast enough to snag a ticket before they sell out :) Prayers are appreciated! As for Friday night...Taylor and I stayed in, relaxed, dinked around on our computers, played with Grimm (he now has treats and bones) and did laundry. Super exciting, I know :P

In addition to the pictures outlining my week, my classes were relatively typical, that is, up until the end of the week, which was also almost the end of the month, which is when level up tests are prepared, given out and graded, projects are done and graded, schedules are changed, report cards are filled out and sent home, and new daily reports need to be made for the following month. So basically, a lot of paperwork. MWF classes have level up tests every three months (like exams to see if they move up to the next class) and with the test, a report card that goes home, every TTH class has these exam/report cards every four months, and every Kindie class has no level up test but report cards at the end of each month. So that means that at the end of any given months each teacher has at least a couple classes that will be taking level up tests, needing report cards, or grading various other materials.

As mentioned above, daily reports need to be made up by the beginning of the new month. Daily reports are just schedules for the teachers, saying what pages we will cover (in the student books, work books, readings, writings, ect) each day that month for each class, and what the daily tests will include, if/when there will be level up tests/review days and if/when there will be projects or special events that month. We have to get our books from the classes Korean teacher, get the attendance sheet, find the corresponding 'daily report sheet' from the book's folder and copy down the days we have in that month for that class for that book. My schedule will only change slightly in April, making me come in later on Mondays and Tuesdays but leave at the same time, and gaining a class during my 3:55-4:55 break on MWF.

Now that you've heard my lame excuse for why I was less available this past week, and now that I am caught back up to this past weekend, I shall leave you, as it is 1:45am in Seoul right now and I desperately need sleep :)

All of my love,

P.s. Taylor and I also went and got our 'health checks' done at the Seoul Medical Center (right down the street from us) this week. These checks included chest X-rays, blood draws, drug tests, eyesight, color-blindness and hearing tests and weight/height measurements. Next step is picking up the results, bringing them to work, who will subsequently bring them to immigration, and then we are one step closer to getting our ARC (Alien Registration Card) and being a true permanent resident...for a year at least, before it expires. Then we can get a phone contract and get that lovely free wifi all the subways/buses tease us with currently, as well as more ease with our bank account and other benefits of knowing we are really staying here for a year :)

Now you are all truly, truly updated! Good night (or annyeonghi jumuseyo)!

P.s.s I now know all of the Korean alphabet and can say quite a few basic words, and the language no longer sounds so, well, foreign :D I try to spend about 30-60 minutes everyday using the language apps on my phone or quizzing myself...hopefully it'll only take me a year to master (or at least squeak by with) my Korean! :)))

P.s.s.s. One more picture, but I'm not sure if its intentional humor or Konglish, I'll let you draw your own conclusion, but either way...it is one of my favorite nonsensical pieces I've come across to date. I give to you...the muffin man! 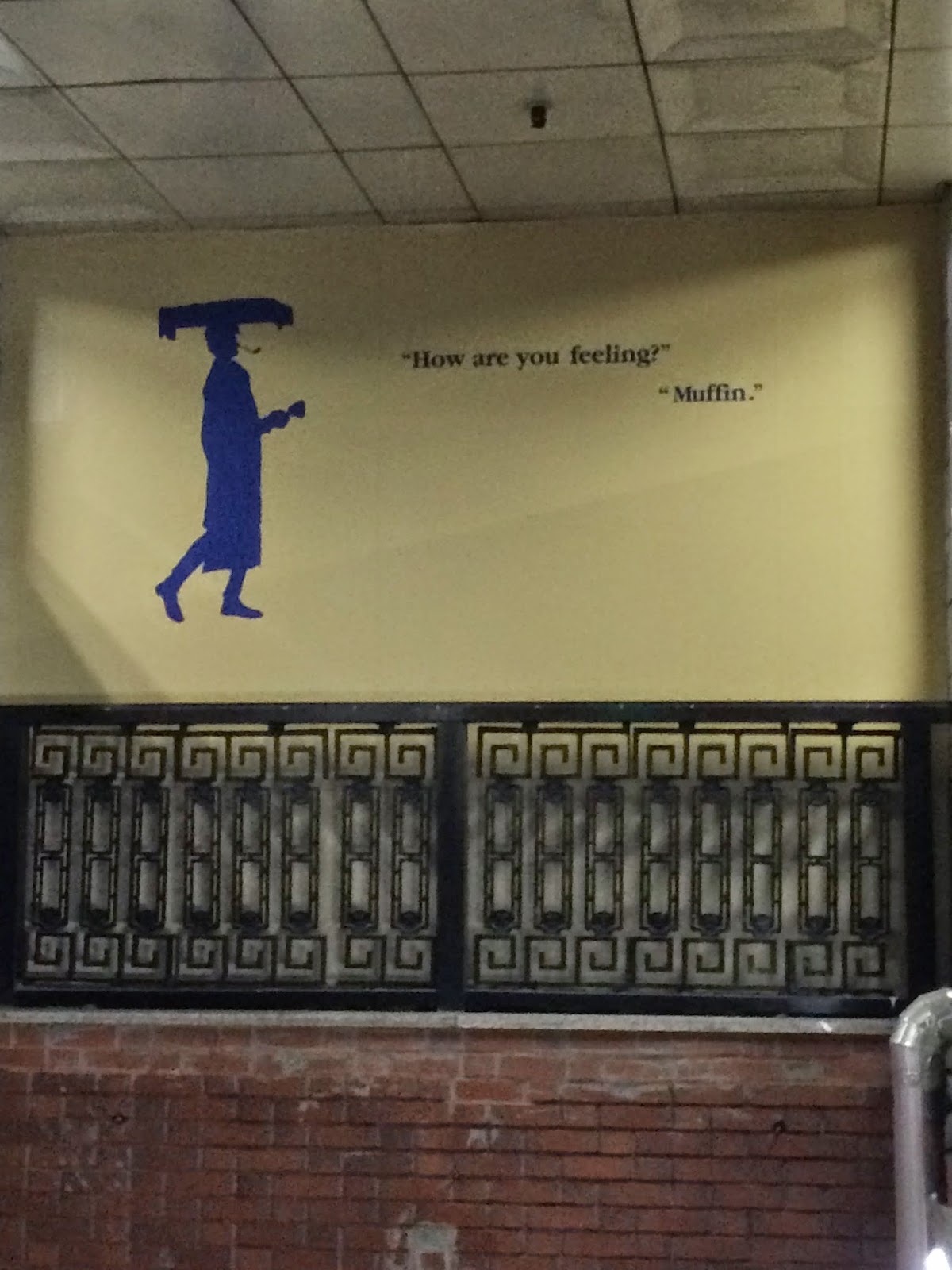 In addition, I've seen another such sign in a different part of Seoul that reads

Which leads me to believe that either the writer thinks 'muffin' is a synonym for 'good' or they know what they were doing and wanted to bring joy to foreigners and English speakers alike. Either way, I approve! Okay, I'm really done now. Good night...for real...again...

China and the Year of the Rooster 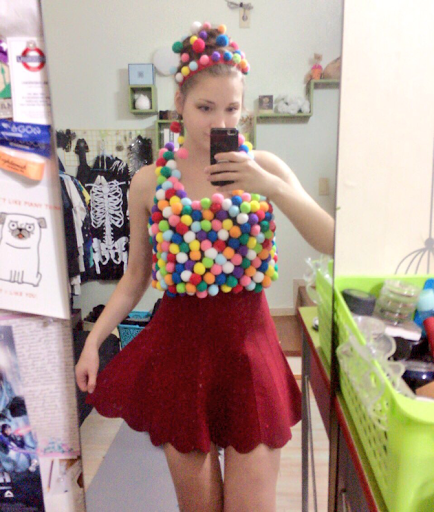